The mummy had an undigested piece of woolly rhino in its stomach. 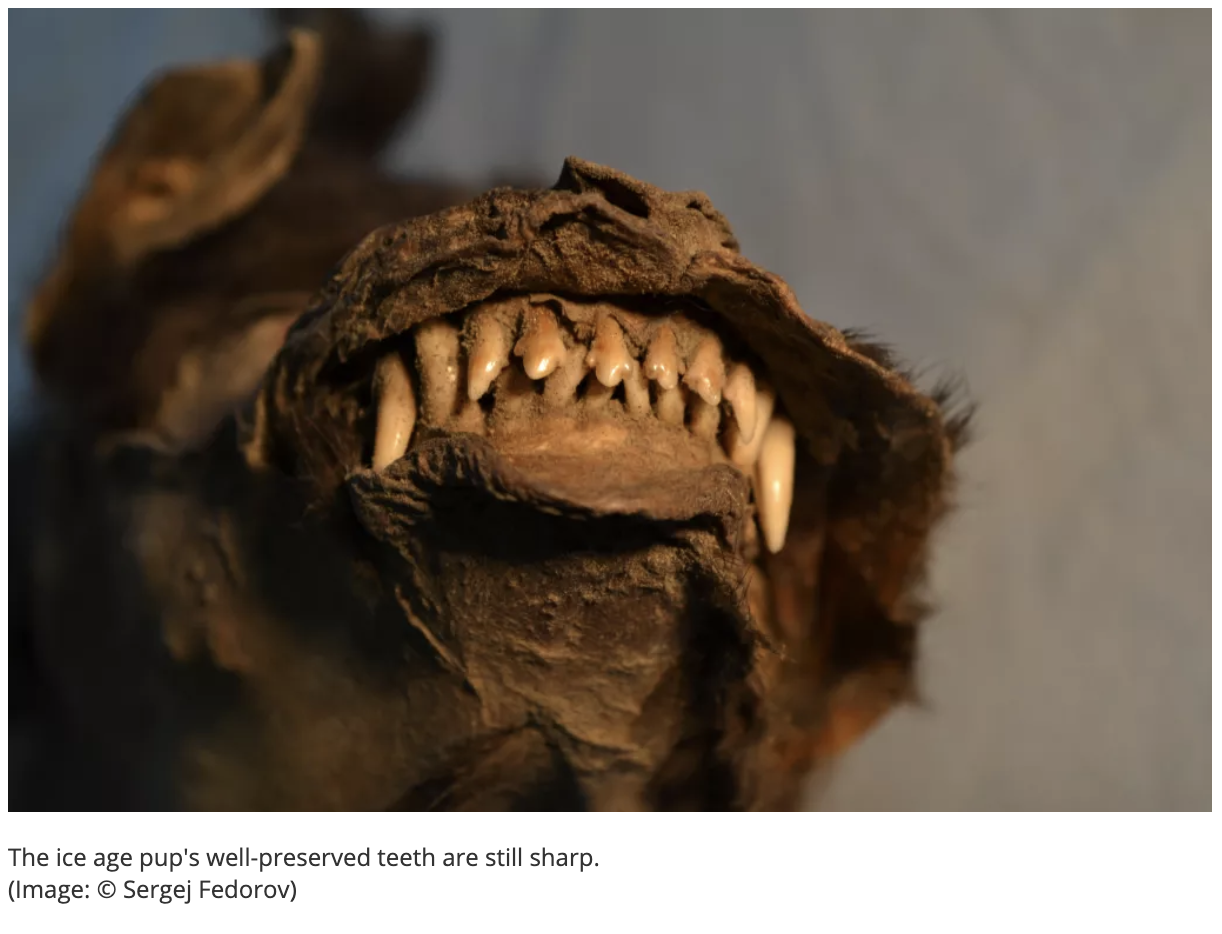 Just before a tiny pup died during the last ice age, it ate a piece of meat from one of Earth's last woolly rhinos.

Researchers made this discovery while doing a necropsy (an animal autopsy) on the mummified remains of the ice age puppy. After finding an undigested slab of skin with yellow fur in the puppy's stomach, researchers initially thought the puppy had chewed off a hunk of cave lion meat for its last meal. 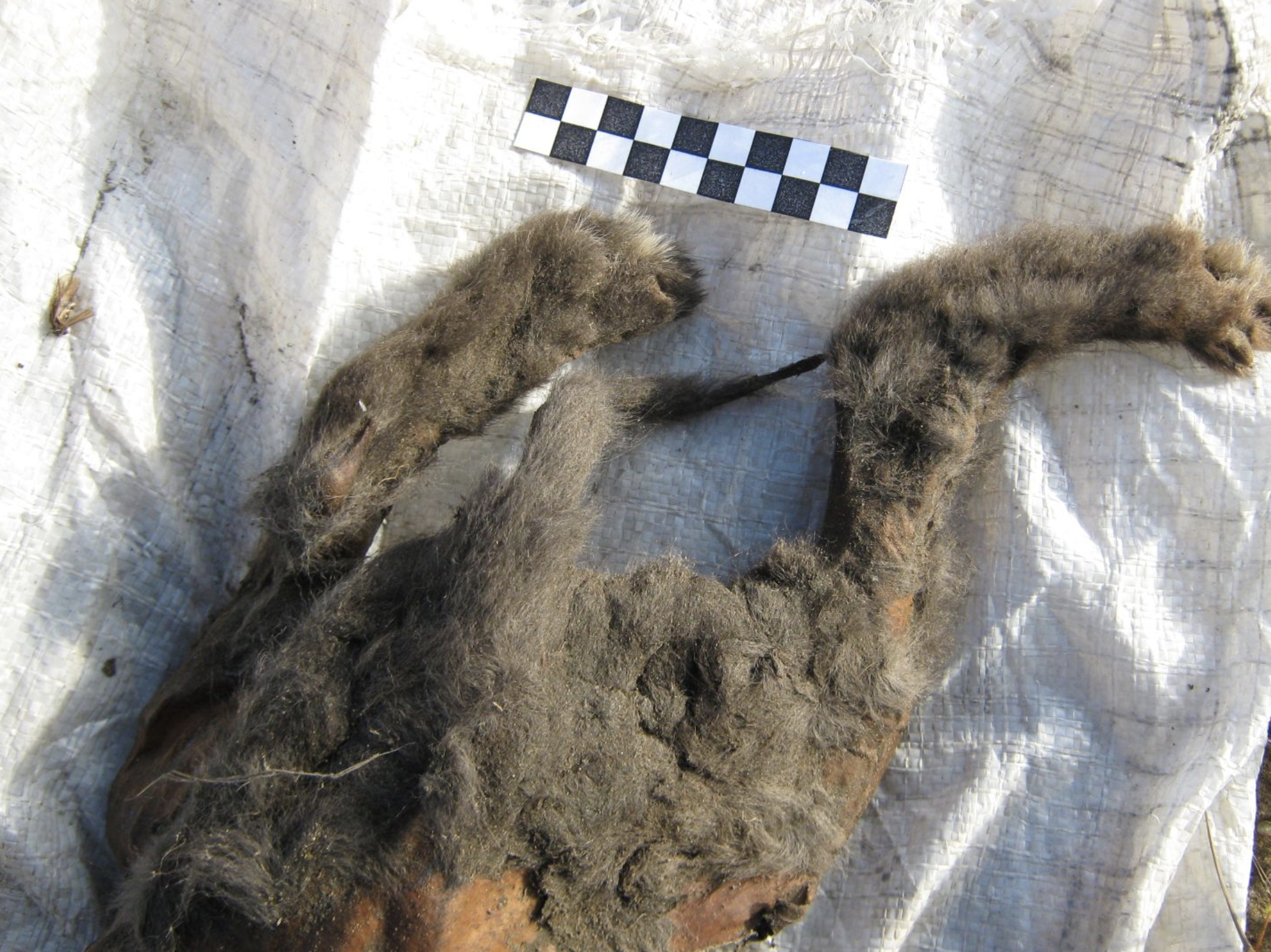 But a DNA analysis of the slab revealed that it wasn't a cave lion (Panthera spelaea), but a woolly rhinoceros (Coelodonta antiquitatis), which went extinct around 14,000 years ago, right about the time that this pup had its last meal.

That means this puppy ate one of the last woolly rhinos to ever exist, said Edana Lord, a doctoral student at the Centre for Palaeogenetics in Sweden, a joint venture between Stockholm University and the Swedish Museum of Natural History. Lord co-authored a study published Aug. 13 in the journal Current Biology on the extinction of the woolly rhinos. 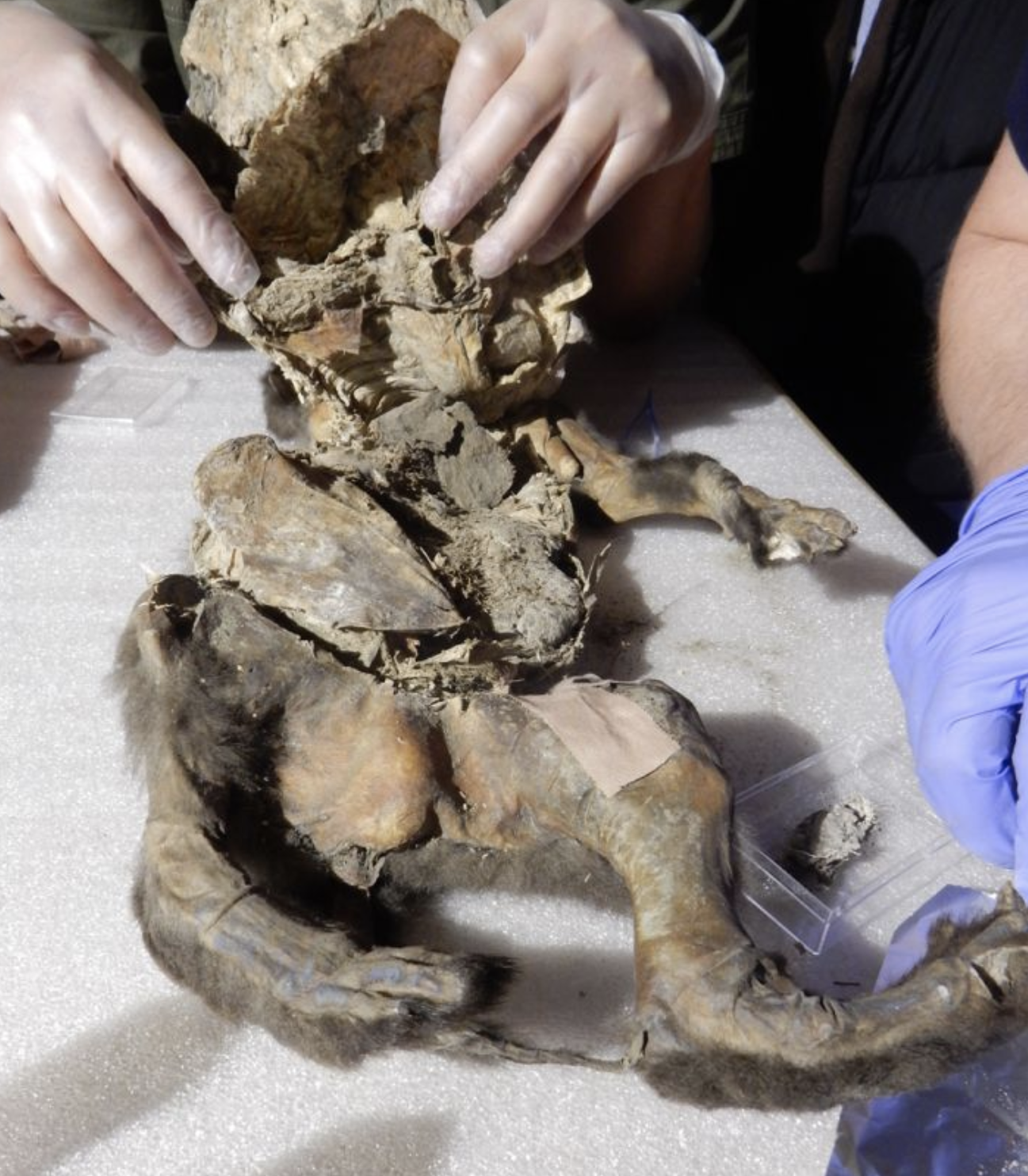 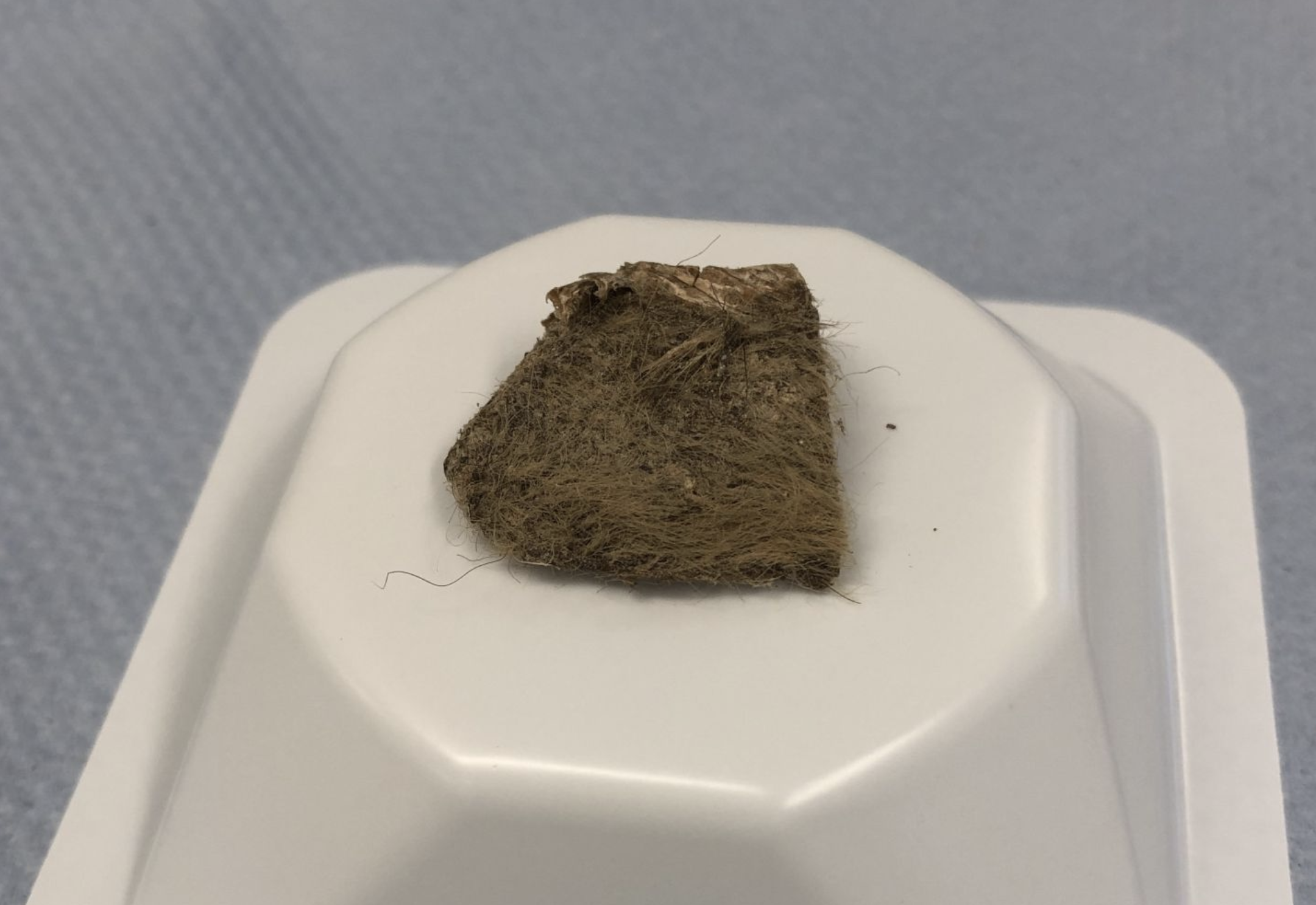 The mummified puppy was discovered in Tumat, a rural locality in northeastern Siberia, in 2011. An analysis revealed that the puppy was likely between 3 and 9 months old when it died, but it's unclear whether the pup was a dog or a wolf, Lord noted, a mystery that also surrounds an 18,000-year-old puppy found in Siberia in 2018, Live Science previously reported.

"I think it falls around that critical point for the dog/wolf domestication," she told Live Science, adding that a research team in Copenhagen is trying to decipher whether the Tumat pup was domesticated or not. 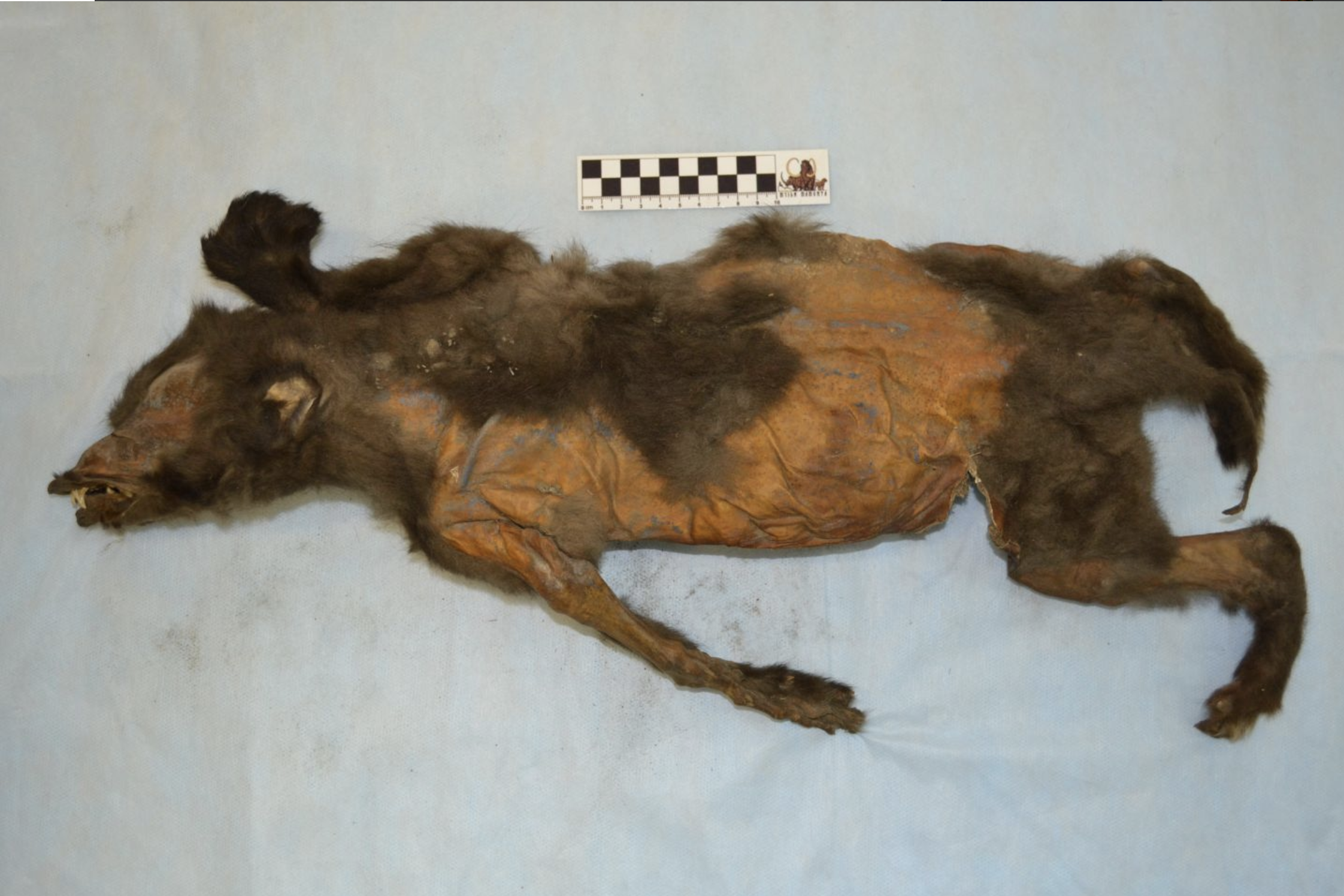 Radiocarbon dating revealed that the Tumat puppy lived about 14,000 years ago. Researchers also radiocarbon dated the woolly rhino slab, to rule out the possibility that the rhino hadn't died earlier and been preserved in Siberia's permafrost, only to be discovered by the puppy at a later date. It's possible "that this puppy may have been one of a scavenging pack, and that the wolves either took down the rhino, or were looking for food and came across a rhino carcass," Lord noted.

If the puppy was domesticated, it's possible that it was living with humans, who may have shared the rhino meal with the pup, she said. Soon after the puppy ate the woolly rhino, it died, although it's anyone's guess how. The researchers were able to rule out one scenario, though; "It doesn't look like it's been squashed," before it was preserved as a mummy in the cold permafrost, Lord said.

Despite this "rhino dinner," predators probably didn't cause the extinction of the woolly rhino, according to Lord's new research. Instead, the culprit was the rapidly warming climate at the end of the last ice age, she and her colleagues found. When the team sequenced a woolly rhinoceros nuclear genome and 14 mitochondrial genomes (DNA passed down the maternal line) — including the specimen found in the pup's belly — they found that the woolly rhino population was stable and diverse up until a few thousands years before the herbivores went extinct. This genetic diversity indicates that there wasn't inbreeding, a problem that plagued the dwarf woolly mammoths on Wrangel Island off the northern coast of Russia about 4,000 years ago. 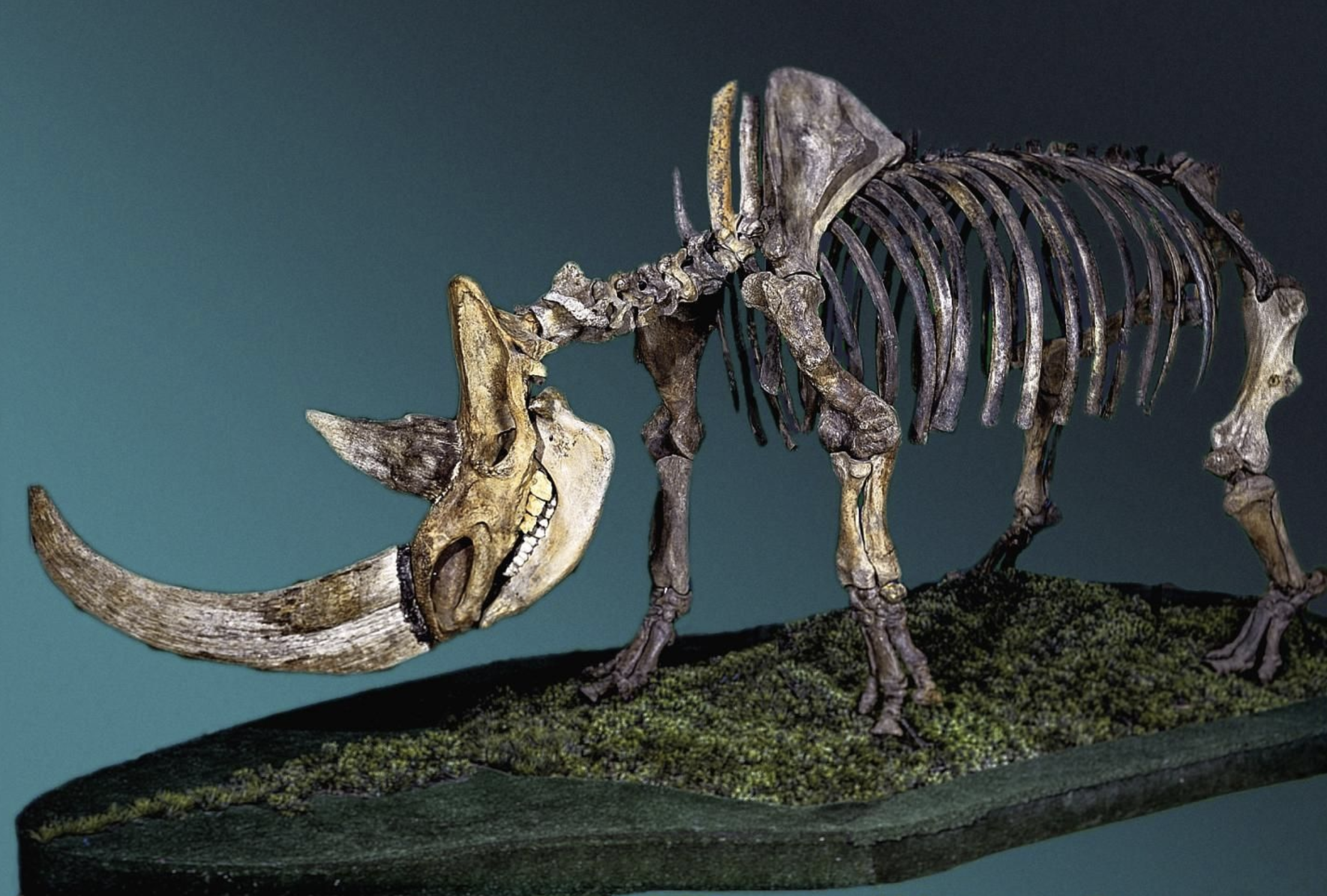 Because of the genetic diversity, as well as "the association of the extinction with the Bølling-Allerød interstadial, a very abrupt warming period [about 14,700 to 12,900 years ago], we suggest that the woolly rhinoceros went extinct due to climate change," Lord said.

The DNA analyses also revealed that the woolly rhinoceros had genetic mutations that helped it adapt to cold weather. One such mutation made the woolly creature less sensitive to feeling the cold, "which means that they would have been able to survive better in the more extreme cold," Lord said. "Because of these genomic adaptations to Arctic climate, they probably weren't well adapted to deal with the warming climate." 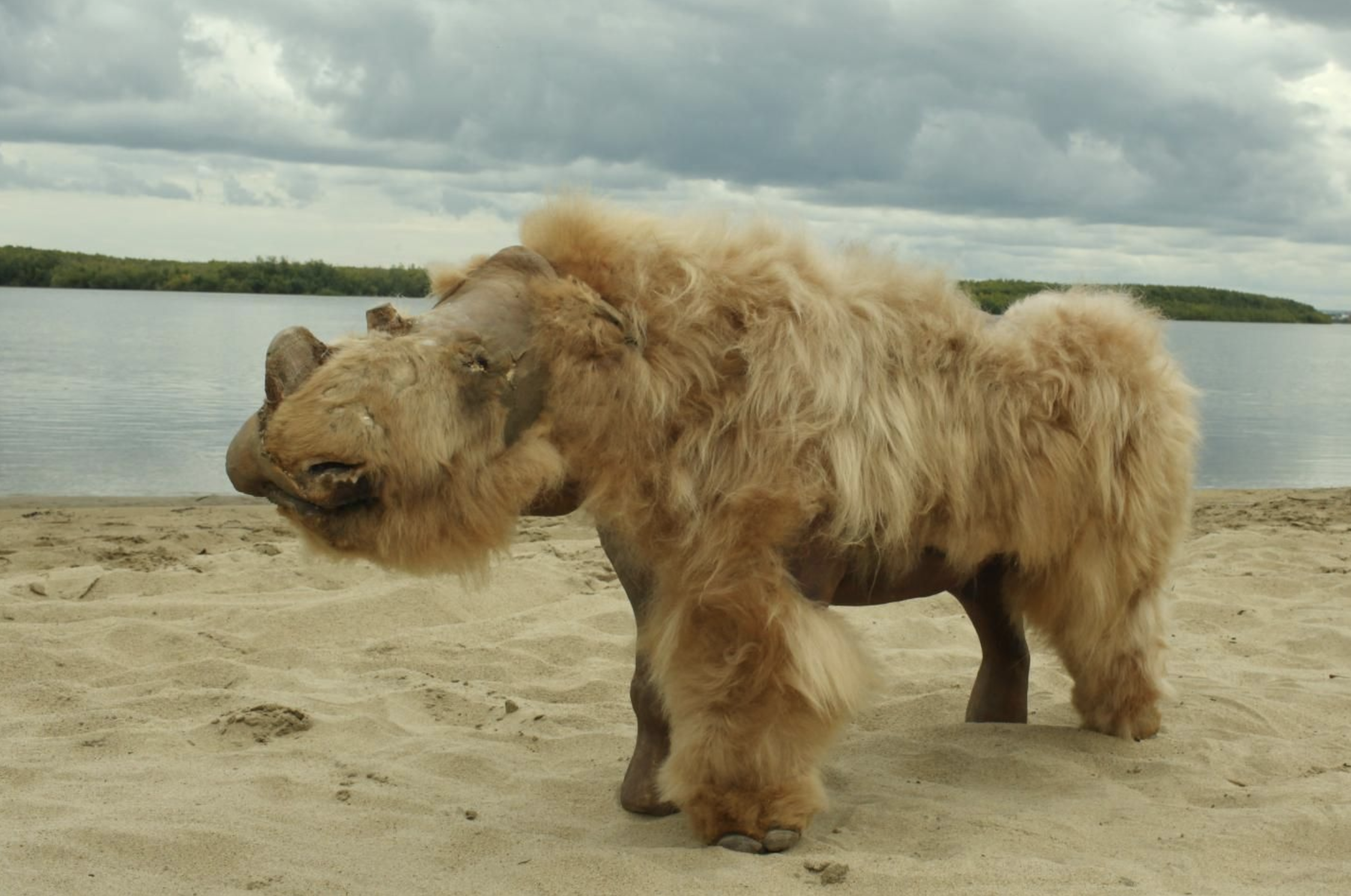 Moreover, the the rhinos were accustomed to foraging in the dry grasslands, but the warming climate during the Bølling-Allerød interstadial changed their environment to a snowy, "wooded shrubby habitat," which didn't provide the "favorite food of the rhinos," Lord said.

Puppies, on the other hand, will eat nearly anything, from woolly rhinos to shoes, which might explain their adaptability.

Feel Like You’re Falling Behind Your Peers? by Nihar Chhaya Illustration by Ana Yael / Owl Illustration Agency It’…